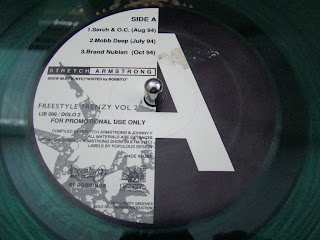 I got in touch with Stretch about this piece of vinyl to get some history on it and this is what he said.

"Freestyle Frenzy were a series of limited edition freestyle compilations highlighting some stellar live on air segments from my radio show on KCR. I believe it is the first of its kind, and predates a slew of future releases that captured unofficial recordings. To give you a little insight into how novel this record was, when Ghostface was in record store in Virginia, someone played for him a 12" that was a bootleg of the Meth/Ghost freestyle off of Freestyle Frenzy. When he got back to NYC, he went straight to Loud Records and was ready to flip. It was a little unpleasant because I was on Loud's payroll as a frelance A&R man. While I believe he was enjoying the drama, and making it seem worse than it was, Steve Rifkind was acting like the sky was about to fall, full of panic, certain that Saholin was about t wreck Loud's offices and cause me bodily harm. It turns out I saw Ghost later that month, and he really had very little idea what I was talking about when I tried to explain what the record was. To this day I don't know what really happened, but it was a bit controversial for a minute because no one could tell if it was a good thing for the artists or if it was a bootleg. Keep in mind this before the digital revolution."

SHOUT OUT TO STRETCH
Posted by TOhDoubleD at 8:28 AM No comments: 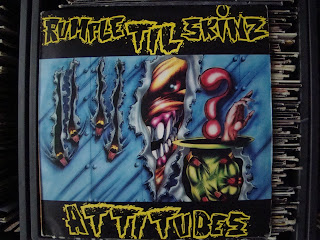 Side B
1.Original Mix
2.Instrumental
Posted by TOhDoubleD at 2:09 PM 1 comment: 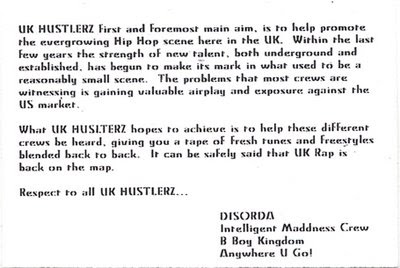 DJ Disorda hits you off with another volume of his UK Hustlerz Series. Someone uploaded this on the BTF forum so thanks to them!
Posted by Andyman187 at 10:57 AM No comments:

DJ Boogie Boy has been a pioneer in the Hip-Hop genre and the art of mixing since the Mid-80’s. Beginning his reign in Hip-Hop and DMC battle style in 1988. Boogie was one of the original members of the DMC battle team the X-Men, now known as the X-ecutioners. Today he is a proud member of the world famous Heavy Hitter DJ Crew. With his roots strictly embedded in Hip-Hop, Boogie has earned the respect and admiration of DJ’s and MC’s throughout the industry. Holding a countless number of battle trophies and titles locally and nationally, he was recently recognized by Sin magazine as the “Mid-West mix-show DJ of the year”, as well as, the Mix-show Power Summits “Midwest mix-show DJ of the year”. He also released “Boogie Boy Battle Breaks”, one of the first records to be put out by any member of the X-Men DJ ‘s. He has had great success, being one of the hottest mix tape DJ’s across the country. He is currently working for many major record labels, creating Artist mix tapes. Boogie Boy has been written about in several respected Hip-Hop magazines. He has toured across the U.S., spinning and doing shows for some of the biggest names in Hip-Hop. One of the things he is most proud of is being a member of the DJ team at B96. I first heard / had Volume 4 of this series and I really liked that shit! Then one day over at the Bust The Facts Forum Jimmy uploaded Volume 1 and then someone else uploaded either Volume 2 or 3 shortly after, but which I forget. It's all about showcasing UK Hip Hop on these mixes and Disorda represents it to the fullest! I'll post the others soon enough! 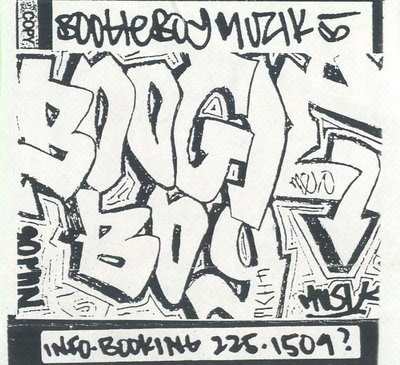 Here's another mix from Chicago's Boogie Boy from 1997. I forget where I got this mix from, I think from A to the L but I'm not sure. To me its not as good as Product of The Environment, Search & Destroy or Take It Personal but still dope none the less. Be on the lookout for more Boogie Boy... Enjoy! 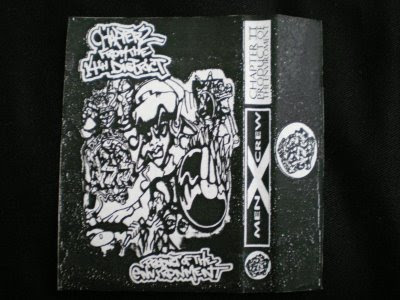 The first time I heard of Mike Boogie was when my man B_ill hit me off with a dub of his 1996 Mixtape Search & Destroy. He's from Chicago and was a part of the X-Men crew. This mixtape precedes Serch & Destroy and is from around 1993. I wanna thank Paul T for hooking me up with a better quality rip than the tape I had. Altho his side b was missing the first 2 mins of the intro I cut and pasted the missing part from my rip so thats why it sounds like shit at the beginning of side b. I have a bunch more mixes from Boogie Boy to share so be on the lookout for those... Let me know what you think of this tape, its on some 4 track shit so you know it's gonna be dope! If anyone has Volume 1 let me know... Enjoy!