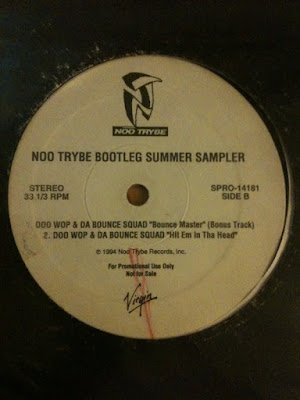 What was happening leading up to the ‘95 Live tape?

Before that, I was known as having the Bounce Squad, which is a group of unknown MC’s I put together. We were really becoming known for our intros – we always did catchy concepts. Every tape I put out from ’93 up to right when ’95 came in was with the Bounce Squad. That’s what everybody was really looking forward to – what the Bounce Squad were gonna do next on the intro. But then I got a record deal with Virgin Records around Fall of ’94, and that’s when everything just went down the drain with the Bounce Squad because it just caused all kind of problems. The label wanted us to move to LA for like a year to record the album…as good as that sounds to some people, after we agreed and we signed the deal, THEN they told us about this ‘moving to LA’ thing. We felt we was gonna lose the streets in New York, because every month it was like anticipation for the next Bounce Squad intro. We figured like, ‘We’re gonna record an album, but we’re gonna lose the streets. So what good is the album gonna do?’ So back and forth we went with the label and we asked for a release. We didn’t want to do the deal anymore. They said, ‘OK, we’ll give you a release but we gotta keep Snagglepuss, which was like our Method Man. Like the way Method Man is to the Wu. They told me he agreed to it! Behind my back, he agreed to staying with them and moving to LA to doing a solo album! He was a key component in the intros, so it was like, ‘What the hell is this?’ So that caused all kinds of problems where, ‘How we gonna do these intros and not have somebody that everybody looks forward to? His punch-lines and his character…man, this is crazy’. So we took a little break.

So how did you get the Virgin deal? I only ever saw the 12”.

‘The Bounce Master’ and ‘Hit ‘Em In The Head’. That’s what actually got me the deal with Virgin. What it was, they just signed me and they signed The Luniz at the same time. I was in the process of waiting for my advance and all that to come in, and the A&R calls me and goes, ‘Yo, don’t you have a crew of MC’s called the Bounce Squad?’ Somebody put him up on it I guess – after he signed me. He was like, ‘Can we add two to the deal? We want Uneek and Snagglepuss’. Like a dick, not knowing the business, I added them to my deal. I was being cool to my peoples, but that was bad business. They shoulda got separate deals! It was a good thing that I didn’t fuck with ‘em, ‘cos they were doin’ shiesty stuff from the jump, right from the door.